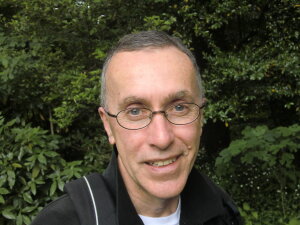 Robert Tierney is professor of Japanese literature in the Departments of East Asian Languages and Cultures and Comparative and World Literatures in the University of Illinois at Urbana-Champaign. His recent publications include Monster of the Twentieth Century: Kōtoku Shūsui and Japan’s First Anti-Imperialist Movement. (Berkeley: University of California Press. 2015) and Tropics of Savagery: the Culture of Japanese Empire in Comparative Frame (University of California Press, 2010) and “Othello in Tokyo: Performing Race and Empire in Early Twentieth Century Japan,” Shakespeare Quarterly 62(4), December 2011. He is currently researching the later works of Nakae Chōmin, a leading Meiji intellectual and modern Japanese “death writings,” a body of works defined by an existential encounter with sickness and death. He may be contacted at rtierney@illinois.edu.

As a scholar with rigorous training in Japanese and comparative literature, I have devoted myself to research of the cultures of modern imperialism. My publications represent a far-ranging, interdisciplinary engagement with literature and performing arts of the Japanese empire. Beyond “literature,” I have written extensively in both English and Japanese on the introduction of ethnography, colonial policy studies, and folklore studies to Japan and charted the development of Japan’s early anti-imperialist movement. I have endeavored to understand both the literature and the intellectual history of imperial Japan within a cross-cultural and comparative framework and as part of the trans-national circulation of ideas and tropes.

In my first monograph, Tropics of Savagery (UC Press 2010), I use close readings of colonial period texts by Nakajima Atsushi, Satō Haruo, Nitobe Inazō, and Akutagawa Ryūnosuke to engage in a productive dialogue with the paradigms of post-colonial theorists. Although Japan was the largest non-Western empire, it occupies a peripheral place in Western histories of empire. Basing my approach on empirical studies of texts, I criticize the limitations of post-colonial paradigms based on Western examples and develop new paradigms to make sense of texts produced under different conditions. On the one hand, I highlight the psychology of Japanese as non-Western imperialists who were subjugated to the West under “unequal treaties” from the forced “opening “of Japan in the mid 19th century. As a “subaltern imperialism,” Japan imitated and modeled itself on other empires, but its conscious mimicry paradoxically produced a distinctive form of imperialism rather than a mere copy. On the other hand, I underscore the prominent features of Japan’s colonial discourse, its tendency to take a triangular form in which the West is always the implicit third side, unlike the dyadic form of Western empires, and the propensity of Japanese writers to deploy a rhetoric of “sameness” to promote identification between colonizer and colonized. My research has offered a new lens for thinking about a pivotal period of modern history in East Asia and as well as challenges of the dominant models of ‘empire’ and ‘imperialism.’

From 2008 to 2009, I was a visiting scholar on a SSRC/JSPS fellowship at the University of Tsukuba, where I researched Japanese adaptations of Shakespeare plays. My Shakespeare project entails an analysis of inter-cultural adaptation that simultaneously situates Japan as a colonial subject vis-à-vis the West and as the ‘imperial subject’ vis-à-vis Japan’s own colonial subjects. Besides joining in collaborative research and translation projects of Shakespeare in Asia with East Asian scholars, I have published “Othello in Tokyo: Performing Race and Empire in Early Twentieth Century Japan,” in Shakespeare Quarterly, the foremost journal of Shakespeare studies in the world. Besides offering a history of Othello adaptations in Japan, I focus on a 1903 adaptation written by the writer Emi Suiin and performed by the leading new wave (shinpa) troupe of Kawakami Otojirō. Shifting the setting to Japan and Taiwan, Emi turned Washirō (Othello), a general sent to rule the colony of Taiwan, into a member of Japan’s former outcaste community (burakumin), a “translation” of Othello’s racial identity into a Japanese context. Osero “performs” modern Japan both as a subaltern imperialist under Western hegemony and as an expanding colonial power in East Asia. I plan to publish an article on Sword of Freedom, an adaptation of Julius Caesar in the style of a puppet play written in 1884 by Tsubouchi Shōyō, who subsequently went on to translate all of Shakespeare’s plays. Focusing on the adapter’s ambivalent relationship with the pro-democracy movement of the 1880s, I argue that the work is an allegory for the collapse of the pro-democracy movement that contested the despotism of the early Meiji regime. It also mirrors a paradigmatic change in the relationship of politics and literature in modern Japanese letters.

In 2013, I received a Faculty Research Fellowship from the Japan Foundation that allowed me to spend seven months as a visiting professor at Tsukuba University and to complete my second monograph, Monster of the 20th Century: Kōtoku Shūsui and Japan’s First Anti-Imperialist Movement (UC Press 2015). This work offers a reassessment of the thinker Kōtoku Shūsui, an anarchist executed in 1911 for his alleged involvement in a plot on the Meiji emperor’s life, and a history of Japan’s early anti-imperialist movement. I focus on Kōtoku Shūsui’s Teikokushugi: nijūseiki no kaibutsu (Imperialism: Monster of the Twentieth Century), a systematic study of imperialism, which preceded J. A. Hobson’s Imperialism: a study by one year and V. I. Lenin’s Imperialism, the Highest Stage of Capitalism by fifteen. Besides offering the first English translation of this work, I place Kōtoku’s theories into the broader context of global debates on the nature and causes of imperialism as well as the anti-imperialist and anti-war movements. In his critique of patriotism and militarism, Kōtoku effectively fuses enlightenment ideals of liberty, equality, and fraternity with Confucian notions such as empathy and righteousness, especially those of Mencius. In my analysis of the history of the movement, I explore the activities of Japanese anti-imperialist activists and their links with Russian anti-war movements and East Asian revolutionary movements. I believe this monograph is an important contribution to modern Japanese intellectual history and to the comparative study of critiques of capitalism and colonialism across the modern world.

Besides my two monographs and my work on Shakespeare, I continue to publish studies of the Japanese empire in both Japanese and English. After presenting my research on the origins of Japanese folklore studies during a speaker tour in western Japan in 2013, I contributed a Japanese language article on Momotarō, a popular folk tale hero who is appropriated as a trope of Japan’s expansionism in the twentieth century, to JuncTures published by Nagoya University. While working on my second monograph, I published a study of Kōtoku critique of patriotism for the Japanese review Shoki Shakaishugi Kenkyū (Research of Early Socialism). An established scholar on Japanese imperial literature, I have been invited to write articles for encyclopedic works such as Cambridge History of Japanese literature and Encyclopedia of Postcolonial Studies, both of which serve as important reference works for students and scholars. I am currently working on translations of colonial period works by Akutagawa Ryūnosuke and Nakajima Atsushi and writing substantial articles that focus on their works set in Korea, whereas I focused on Taiwan and Micronesian colonies of Japan in my earlier books.

During my sabbatical year 2015-2016, I was a visiting researcher at the Institute of Comparative Culture at Sophia University in Tokyo, Japan. Over the course of the past year, I have focused on two new research projects. I have completed a draft of a monograph on the thought and legacy of Nakae Chōmin (1847-1901) in Japanese and global intellectual history. This work is also a continuation of my earlier monograph on Kōtoku Shūsui, who was Chōmin’s student. Chōmin, who studied in France during the early Meiji period, became the foremost interpreter of French thought in 19th century Japan (among other accomplishments, he translated Rousseau’s Social Contract into Japanese) and was the intellectual leader of Japan’s pro-democracy movement in the 1880s. Though he has been widely studied as a radical democrat in Japan, he has received little attention in Anglo-American scholarship. Throughout his life, he was continually in dialogue with the two important traditions that shaped modern Japan: Western, particularly French, thought and Chinese philosophy. Interestingly, he viewed classical Chinese learning as a vehicle to introduce Western democratic ideals to Japan and classical Chinese as the best medium for translating Western concepts. By studying his thought, I explore the radical possibilities of the Meiji Restoration and the diversity of reactions it inspired. As part of this project, I have translated the two final works of Nakae Chōmin (1847-1901): One Year and a Half and One Year and a Half, Continued (1901), titles that allude to a doctor’s prediction that Chōmin would die of throat cancer in a year and a half.

Through my translations of Chōmin last works, I become interested in modern Japanese “death writings,” a body of works defined by an existential encounter with sickness and death. This new project also grew out of my longstanding research interest in medical humanities and the representations of illness as a metaphor. I have given conference presentations in Japan and the US on the literature of leprosy in Japan, notably its prevalence as a theme in crime and detective fiction. However, during my sabbatical year, I realized that a larger study of death literature would be a more valuable intellectual project than a study of leprosy. Besides Chōmin’s One Year and a Half, I will focus on death journals by the poet Masaoka Shiki (1867-1902) who suffered from spinal tuberculosis, and Natsume Sōseki’s (1867-1916) Reminiscences and Other Matters (Omoidasu koto nado) an essay written after his near death experience. These different works share common traits that distinguish them as writings belonging to the Meiji period (1868-1912): doctors and hospitals play a very minor part in these works because death is not yet "medicalized" nor is it a solitary experience. In addition, these writers have an agnostic attitude toward religion and a skeptical attitude toward metaphoric interpretations of illness. Despite these similarities, each writer has a distinct existential experience of time and space, an idiosyncratic sense of the physical body and pain, and a highly individual sense of the purpose of writing in the face of death. I have spent most of this year studying primary texts and plan to devote more time to the theoretical and historical issues of death studies in the next year. Within the next few years, I will apply for external funding to turn this new project into a book.

In retrospect, I realize that my new projects bear a resemblance to my earlier books. Like Monster of the Twentieth Century, my new monograph on Chōmin will be a work of intellectual history that looks at a thinker who welded radical Western thought with traditional Chinese thought into a new compound that claimed universality. Like Tropics of Savagery, my study of death writings is a work of cultural studies focused on close readings of literary works in relation to social discourses and the historical backdrop of the Meiji period. In the introduction to Tropics of Savagery, I describe the writers I study as “tenants in the house of language rather than architects.” This comment defines my approach to imperial literature, which is in constant dialogue with other colonial discourses. This notion of “tenant” of language plays a less important part in the death book primarily because I devote much greater attention to poetry as a form of expression and I view the poet’s relation to language as different from that of the “tenant.