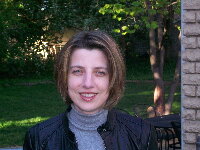 Stephanie Hilger is a scholar of eighteenth-century literature and culture, with a focus on gender studies and medical humanities. She is Professor of German and Comparative Literature. In addition, she holds appointments in the European Union Center, French, and Gender and Women’s Studies. Since 2021, she has also been affiliated with the Department of Biomedical and Translational Sciences at the Carle Illinois College of Medicine.

Her current book project, Liminal Bodies: Hermaphrodites in the Eighteenth-Century, examines the eighteenth-century fascination with sexually ambiguous bodies, so-called hermaphrodites, and argues that they became the symbol of an era in which centuries-old ways of knowing were collapsing. Within three national contexts (British, French, and German), Liminal Bodies focuses on the genre of the case study, which gained in popularity during the eighteenth century by combining literary and scientific conventions. Liminal Bodies argues that, in the analysis of these case studies, sex/gender and (dis)ability need to be thought together, along with race and ethnicity, to understand the intersectional ways in which identity was constructed during the Enlightenment. For this project, Professor Hilger was awarded fellowships from the Program of Faculty Study in a Second Discipline, which allowed her to study embryology, the Humanities Research Institute, and the Center for Advanced Study.

Professor Hilger’s previous books also investigate the ways in which gender operated in eighteenth-century discourse. Gender and Genre: German Women Write the French Revolution (2014) examines German literary texts that depict and represent women as political agents during the French Revolution and thereby question the erosion of women’s rights. Her first book, Women Write Back: Strategies of Response and the Dynamics of European Literary Culture, 1790 1805 (2009) explores the ways in which late eighteenth and early nineteenth century women authors rewrote and responded to texts written earlier in the century by male intellectuals.

In addition to her monographs, Professor Hilger has (co-)edited three volumes in the medical humanities: Bodies and Transitions in the Health Humanities: Intelligible States of Corporeality (with Lisa DeTora, 2019); New Directions in Literature and Medicine Studies (2017); and The Early History of Embodied Cognition from 1740 to 1920 (with John McCarthy, Nicholas Saul, and Heather Sullivan, 2015).

In 2019, she was awarded a grant for “The Art of Medicine: A Public Square on Health and Medicine for the Illinois System” from the Presidential Initiative to Celebrate the Impact of the Arts and the Humanities at Illinois for curriculum development, research activities, and public outreach.

Her new projects include an edited collection on Medical Humanities in German Studies and a book about physician-writers in the eighteenth century.

In addition to several teaching awards from the College of Liberal Arts and Sciences, Professor Hilger was recognized as the 2017 Medical Scholars Program Advisory Committee Outstanding Advisor of the Year.

Presidential Initiative to Celebrate the Impact of the Arts and the Humanities Award for “The Art of Medicine: A Public Square on Health and Medicine for the Illinois System.”

Liberal Arts and Sciences Faculty Fellowship for Study in a Second Discipline for book project, “Liminal Bodies: Intersexuality in Literary and Medical Discourse,” Spring 2013.
Faculty Fellowship from the Illinois Program for Research in the Humanities, 2011-2012
Katholieke Universiteit Leuven/University of Illinois Faculty Exchange Award, Summer 2009
Faculty Fellowship from the Center for Advanced Study, 2008 and 2019
College of Liberal Arts and Sciences Lynn Martin Award for Distinguished Women Teachers, 2011-2012
Recipient of the 2016 Goethe Society of North America Essay Prize for “Orientation and Supplementation: Locating the "Hermaphrodite" in the Encyclopédie.”